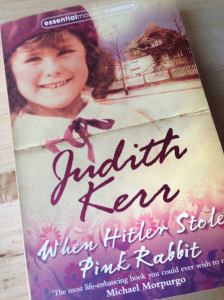 I’m not sure how I missed reading this as a child since it’s a proper modern classic written 40 years ago. Although having said, that reading it as an adult has left me fascinated by Judith Kerr as a person and keen to read the other books. I’m not sure I would have seen the significance as a child but I am sure I would have enjoyed the story and got to understand a little more about the war.

Judith Kerr, of ‘Tiger That Came to Tea’ and ‘Mog’ fame, wrote three books about her childhood of which this is the first. It recounts two years of her life from 1933 when her family were forced to flee Germany via Switzerland and Paris as her father’s life was in danger. It cleverly introduces the impending threat of the Nazi party whilst seeing the excitement of adventure through the innocent eyes of a child. It is a lovely book of a journey of family, adventure, escape and change in a turbulent time.

In terms of putting the book in context for a child it would be a really good idea to read the note from the author at the back where she writes:

“If we’d tried to leave Germany a day later, if my mother hadn’t shut me up when I nearly gave us away at the frontier, if my father hadn’t been so far-sighted, it would have been too later. I would have been one of the million and a half other Jewish children who died in Nazi concentration camps. I can never forget how lucky I’ve been”.

This is a really appropriate book for children aged 9-12 to read when studying WW2 in key stage 2.