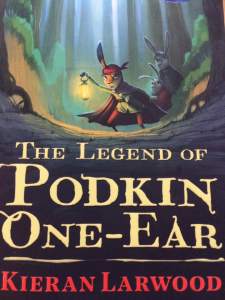 I was introduced to this book by a lovely lady in Waterstones. I know you aren’t supposed to judge a book by it’s cover but it is a lovely one, and as it came recommended as an adventure my youngest and I were both keen to read it.

It was advertised as being similar to Watership Down. I get really frustrated by everything being compared to something else. Every book seems to say “if you like Roald Dahl you’ll like this” even if the only similarity is that the characters are a bit disgusting. Similarly Podkin is apparently like Watership Down. Well it is definitely about rabbits and they are anthropomorphised, plus there is a bit of fighting. But this book is about magic which is a whole other kettle of fish, or rabbits. I know I’m getting a bit off topic but I just wish publishers had a little more imagination sometimes.

The book is great in my opinion. It’s a folk tale as told by a rabbit story teller to attentive little rabbits. A story of good versus evil and the balance of things. The evil side, known as the Gorm, are scary and unnatural. The goodies are eclectic and fun. I especially liked the old blind warrior rabbit  and Podkin’s kick ass sister Paz.

In spite of being a bit frightening in places my nine year old flew through the book after the first few chapters (which she said were a bit slow). In her view the best bit was definitely the end and that would most definitely be a spoiler so you can find out for yourself.

I could see this being made into an animation. Great story and cracking characters, plus a bit different to our recent reads. We’re really looking forward to the sequel The Five Realms: The Gift of Dark Hollow